Norm and I organized the FIRST robotics presence at Maker Faire for the past 9 years. Given that Make Magazine has gone out of business, last year was the last one.

I think some of the Mini Maker Faire events will live on. The NY and San Mateo ones were quite a production to put on. NY hadn’t even opened the call for Makers yet so it makes sense for the event not to happen.

As a way of saying goodbye, I’m posting some of memories from the event.

Maker Faire was held rain or shine. We learned that it can in fact be too hot for a robot. Luckily teams innovated with a sunhat.

The first year our “rain plan” was “it better not rain.” Luckily, we got more sophisticated by the year it was really rainy and windy overnight.

Little kids loved the robots and we won a ribbon almost every year. Two years ago, Norm had the great idea to have each team there on Sunday take a picture with the ribbon.

A shout out to every participating team over the years. As we grew from a small space to a big attraction, we couldn’t have done it without you. Thank you for influencing lots of people and spreading the reach of FIRST. I’m proud to say that I helped *make* a *space* for FIRST robotics exhibitors. 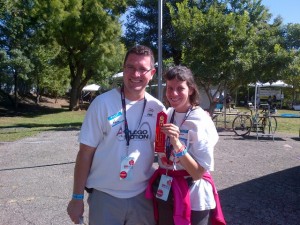 Last year, I blogged about co-organizing a booth at World Maker Faire and that we won a blue ribbon.  This year we won a red educators choice ribbon.  Which was also very cool.  Plus this year, my friend and I ran a whole tent.

It was a lot of fun and we got to see some from robots that the kids made.  Of course we had all the FIRST robots (FIRST Lego League, FIRST Tech Challenge and FIRST Robotic Challenge) that the students build.  But we also had a heat/motion sensitive hand sanitizer dispenser.  Especially helpful since we were next to the port-a-potties! 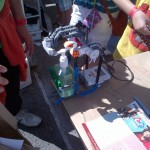 Speaking of rain, our rain plans get better every year!  Let me tell you what happened this year.

Norm and I gave the morning briefing to the teams.  Which covered what to do if it rains.

It starts drizzling.  Luckily everyone was listening and was able to execute the rain plan.  And also luckily, the rain didn’t last long.  While we were waiting under the tent, Bronx Science added an umbrella to their robot. 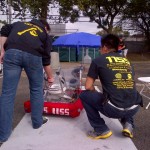 More rain.  Again, everyone dealt with the electronics quickly and the rain didn’t last long.

The prediction was for rain 8pm-midnight and downpours (.5 to 1 inch per hour) from midnight-6am.  Clearly we needed to protect the booth well.  We moved everything to the center, flipped tables over and covered the FTC field with: 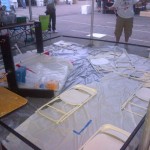 I was first to the booth and was thrilled to see that our plan worked.  I had some students help me lift the plastic from the corners in.  Someone said it looked like a goldfish bowl – there was so much water inside.  But the tops of the foam mats were mostly dry. 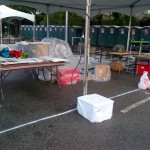 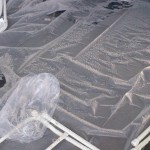 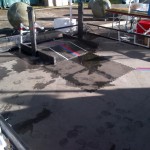 While we protected the top of the field, we didn’t for the bottom.  It was fine, but I hadn’t realized how wet it was down there until we picked up the field! 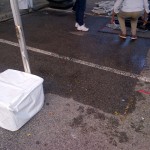 What is the lesson?

Have good plans.  Communicate them.  Make them better year after year.

Over the past week and a half, I co-ran two events.  One was the NYC FIRST robotics booth at Maker Faire (see picture.) The other was an area contest for Toastmasters. 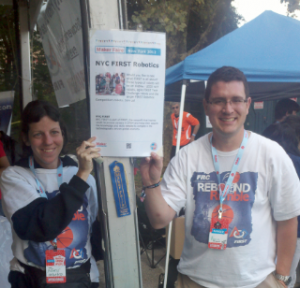 Since these two events were so close to each other, I spent some time comparing my experience.

Maker Faire: Norm Sutaria and I have run the NYC FIRST robotics booth at Maker Faire for the past three years.  Our booth is 20 x 30 feet and we coordinate robotics teams from elementary school through high school to show their robots.

Toastmasters contest: Toastmasters holds speech contests where contestants from multiple clubs square off.  Since our area only has four clubs, I ran the contest with another area governor to make it a bigger event.

Our booth won an editors choice award at Maker Faire.  That is really cool and exciting.  Toastmasters gives ribbons out for every speech and certificates of appreciation for helping at a contest.  I don’t find these motivating because you get them frequently regardless of whether you did a good job.  The Maker Faire ribbon actually feels special.  I don’t know how many were given out, but we didn’t win it the last two years making it special for us!

For Maker Faire, Norm and I get to practice delegating.  Both to each other – play to the other person’s strengths – and to the teams.  We are both good at delegating to students and not trying to do everything ourselves.  For planning, it was more of claiming the work we wanted to do or were best at rather than delegating.  There was some level of needing to trust the other person at the event though.  It’s important to eat and take breaks knowing the other is in charge!  And for me, remembering to ask for help lifting things when I need to and not worrying about not “pulling my weight” in that specific area.  I do lots of other things!

For Toastmasters, we split planning by event.  I did the lions share of the planning/organizing/running this time and the other area governor will this time.  As a result, less delegating went on.  There was some of course since a contest has a number of contest officials.  And I did seek volunteers for certain parts.

The first two years, our Maker Faire rain plan was “it better not rain.”  This year, rain was likely so we came up with an actual rain plan.  We announced it both mornings and used it Sunday.  (The plan was to cover up the electronics with tarp and painters plastic, have some students under the tent and encourage most to go into the Hall of Science.)

For Toastmasters, I thought about things likely to go wrong and had an extra judge on hand along with a plan for how to get more if needed.  For the most part, it was “figure out how to run with it” if things went wrong.  Which worked out just fine.  I think this is because a Toastmasters speech contest is a lot more predictable.

Interestingly, this shows a difference between volunteer work and paid work.  In the business world, I don’t typically plan to wing it if something goes wrong!

On the tech side, I used Google forms to organize both events.  For attendance lists in both cases and collecting data, listing teams, etc for Maker Faire.

Where I grew the most

Both FIRST robotics and Toastmasters help with soft skills and leadership skills.  Toastmasters does it more obviously – it is in their mission.  FIRST robotics “tricks” students into learning about teamwork and leadership through the “distraction” of a robot.  Does it for the mentors too!  I definitely stretch myself and learn the most at the Maker Faire event.  Partially because I talk to a lot of people I don’t know and give the “FIRST pitch.”  Partially because running the booth is a lot more work.  And partially because a public event is a lot less predictable than a Toastmasters contest.

Both work though.  Because if you tell a techie he/she will spend a weekend practice soft skills, you aren’t likely to get a good reaction.  Throw in robots or the need to get something done and it changes the picture completely.