I recently became responsible for managing the NYJavaSig social media. I’ve been using TweetDeck for scheduling Twitter posts. Today I researched scheduling Facebook and Linked In posts. Here’s what I learend

Buffer.com was recommended to me. I like it. It is free for up to three channels/connections. There’s a limit on how many posts you can have in the queue at the same time, but it is way higher than I would need.

Once I registered, I immediately dropped the Pro trial so I could see what it would look like for me. Connecting Facebook was pretty easy. I had to sign in with Facebook to connect. It got dropped once and I reconnected. But after that, it seemed happy.

LinkedIn was tricker and I encountered two problems:

I learned about HootSuite from a linked in article about scheduling posts. I had two problems

Most people familiar with my UI work know I’m all about preserving screen real estate. In other words, I like to design the most streamlined interface with as few unnecessary buttons and glitter as possible. Why do I need a pretty graphic taking up 1/4 of my screen when I could using it for something else?

I all ready had my doubts about Facebook’s current ad system which included such user-requested buttons as “More Ads” as shown below: 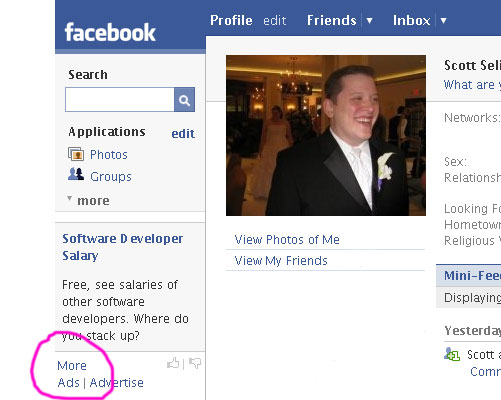 Talk about a waste of space, can’t imagine why anyone would click on the button. That’s like a person requesting more commercials while watching TV.

But the genius development/marketing team from Facebook have done it again. Yes, from the makers of such buttons as “More Ads” I give you the redesigned (currently optional) Facebook interface: 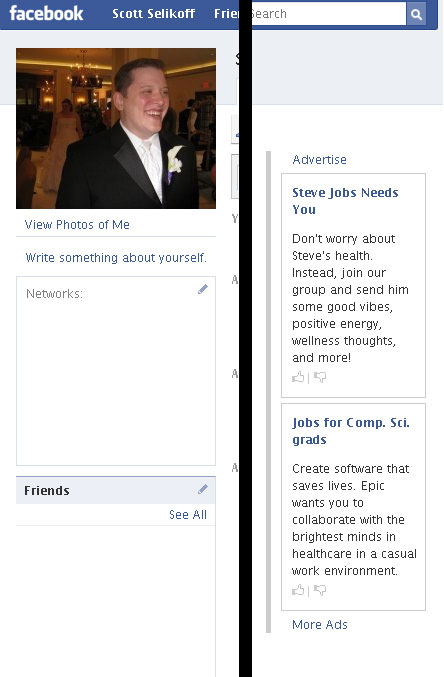 I’ve cut out the middle and obfuscated it a tad (if you don’t know the meaning of the word ‘obfuscate’ and you’re a developer, go look it up, you should). Notice it now has much larger ads, that instead of being integrated into your profile stick out a lot more with nothing above/blow them. Also, there are two by default instead one! This *new* more wonderful interface may worry some people that Microsoft’s acquisition of Facebook is beginning to show, but don’t worry, the “More Ads” button has not been lost!