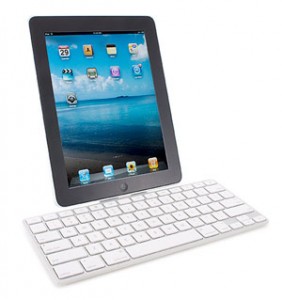 1. Set up and Blogging Software
For my blogging spree, I used an Apple iPad 2 with an Apple Wireless Keyboard. I started with the WordPress iPad application, but found it too frustrating to use. The local/remote saving of articles was problematic, as Jeanne explains, and the interface felt very last-minute and cheap. I had three options remaining for blogging: the WordPress web interface in Safari, word processing software such as Apple Pages, or a plain old text editor. Since Internet was unstable at the conference, the first solution was out. I also vetoed fancy word processing software, since in the end the articles would be copied as plain text to the web browser for publishing. I settled on a plain text editor and was pleasantly surprised that my document management app, GoodReader, doubled as a text editor.

2. GoodReader as a Live Blogging Software
I liked blogging in GoodReader right away because it presented me with a full-screen text editor and my documents were always saved locally. I wrote up dozens of articles in GoodReader and then pasted each article into the WordPress web browser editor for publishing, which only took a minute. The only downside of using GoodReader was in the creation and naming of new files. By default, new text files are saved as “New File.txt”. In order to change the name of an article, you have to exit out of writing, open the file management interface, select the file, rename it, close the file management interface, and re-open the file. I would have preferred a more direct approach, such as offering me the chance to name the file when I created it. Also, a spell-checker after I had finished typing would have been nice.

3. iPad + Keyboard
Prior to this conference, I had never used my iPad with a keyboard. After writing thousands of words with the wireless keyboard, I can honestly say I would never go back to touch-typing for blogging. With the keyboard, the iPad became much closer to a real laptop — or more accurately a netbook — but was much smaller, lighter, and lasted a lot longer on a single charge than my full-sized MacBook Pro.

Conclusion
I loved typing with an iPad, so long as a wireless keyboard was available. Contrasting this to JavaOne two years ago, where I had to go from presentation to presentation hunting power outlets because my MacBook could barely go half the day without power. I could honestly see taking it to business meetings and typing for hours on it. While there are still some additions I’d like to see to iOS, such as Command-F for find, the experience was quite enjoyable.

2. Throw Away All The Rules. Now What Process Do You Follow?, presented by Jeanne Boyarsky.