I wanted to have an image of Duke (the Java mascot) as a jigsaw puzzle image for a presentation. First I googled and couldn’t find an existing one.  I found one on a blog, but it doesn’t look good from the distance. Also, it isn’t labeled for reuse.

So rather than work on content for my presentation, I decided to learn how to make a jigsaw puzzle image. It wasn’t hard.

I decided to use this image of Duke as a stuffed animal that I found online. I was thinking about using a picture of me and Duke but the lighting was too dark to come out well on a slide.

Step 2 – get a jigsaw puzzle template

I found this template online.

Now you have a single image that you can use in your own deck. 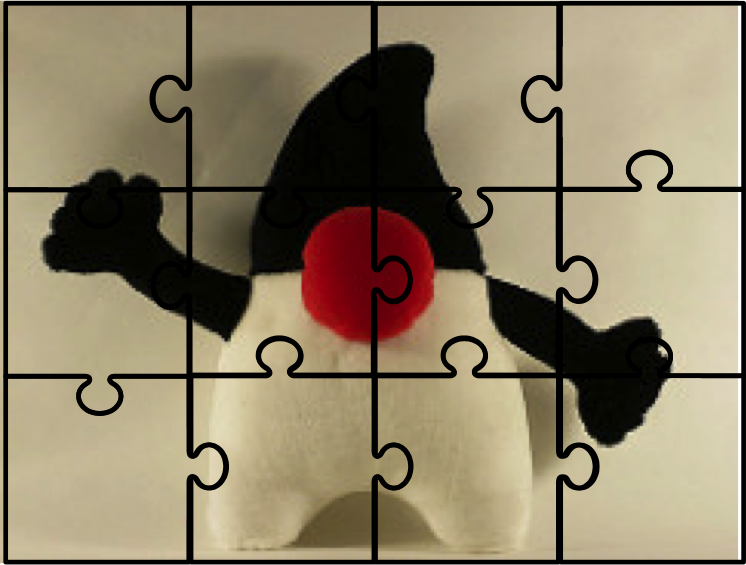 Using JShell to look at modules

Refactoring the module to split into two

I like the live demo approach along with the emphasis on both concepts and common problems. I also like that Mark left a lot of time for Q&A.

For more blog posts from JavaOne, see the table of contents

What expect build tools and IDEs to do

Moditect
Maven plugin that generates module-info.java based on dependencies. Says helps a little but doesn’t do all the work. [how?]

How to modularize your app

[Note: He recommended renaming packags as a solution to spit packages. That sounds like a horrible idea unless you can guarantee only you call that code]

My take before session: You know how they say that first impressions matter? The speaker is wearing a suit. 90% of the people in the room are wearing jeans. Two people in the room are wearing a suit The speaker and someone he knows. Then he showed the table of contents. There are 29 points in 45 minutes in the outline. Preparing to have my head spin!

My take after session: He is in fact technical. The suit was misleading! The pace was way too fast though; drinking from a fire hose. Not enough time to understand/process many of the points. He talks fast (as do I), but key is to *pause* if you talk fast so people can catch up. Also the side transitions were distracting. A cube transition is cute. But if you are reading when it moves, it is disorienting. And due to the speed, there was a good chance of being reading when transitions started. This was good information, but should have been two sessions so split up and a decent pace. And omiting how to migrate your libraries; that’s a talk on its own There is a Maven BOF tonight; maybe folks can discuss more then!

One minute after the official end time, he asked if there were questions. My head was spinning with questions. [I didn’t even have time to process which was most important]. Another attendee asked if having JUnit tests in a parallel directory with the same package name is a split package. The speaker said yes and went on to say to wait for Java 10 or rename. I interjected at that point. Unless you are distributing a test jar, I don’t think this is a problem. In fact, most IDEs compile both the /src/main/java and /test/main/java directories to the same folder. I stated this and asked the speaker if he agreed. He said yes.