Three years is long enough to forget a lot so I managed to forget that I got this working with python shortly after writing this blog post. Writing this down so I don’t forget again.

I was encountering an odd problem and needed to see what files were in a Jenkins workspace. For a freestyle job, this is easy; you just click on “workspace.” 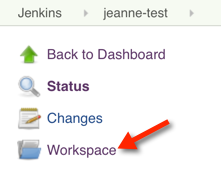 Where did it go?

When using a pipeline, you can have multiple nodes in your pipeline so it isn’t that simple. As described in JENKINS-33839, this means you need to click around to get to it. While I did find it, this isn’t something I do often enough to remember so writing it up for my future self and anyone else who happens to read this. (Right after I wrote this, I saw JENKINS-34321 which does explain the steps well. Mine has pictures so might as well leave it.)

Implication #1 – wipe out workspace is gone

Since you get to the workspace from within the build, I thought this meant there were multiple. And I was afraid for the disk space. Luckily, that is not the case. Within the same node, each build does re-use the same workspace. So if you go to an old build and look at the “workspace”, it is the workspace from the latest run. Which isn’t intuitive, but I’m glad it works that way.

The first Jenkins LTS (long term support) release fro Jenkins 2.0 came out this week.  It is Jenkins 2.7.1 and is available for download here. CodeRanch is running 1.640 and we decided to upgrade shortly after the LTS release came out. There have been numerous weekly releases for 2.0. We wanted the LTS release so it is a little more stable.

Another moderator at CodeRanch installed Jenkins and Sonar originally. Unfortunately, they are mixed together in the data directory. Anyway, I started by taking a backup in case I want to go back to 1.X at any point or mess it up/ I’m not terribly worried because our Jenkins install has 5 jobs on it. Worse case, I can do a fresh install and re-create them. I want to try upgrading first though since it is easier (at least in theory.)

The tar file was 1.2 GB. This is because it includes the job workspaces and Sonar.

Conveniently our Jenkins install is just the war. So I backed up the old war and uploaded the new one:

Starting up with Jenkins 2

So I clicked the “upgrade now” button. That led to a prompt to ask if I wanted to install some pipeline related plugins.

I said yes so they installed.

Then I got another button that Jenkins was ready. Still looks the same and my jobs are still there.

When I went to look at the plugins that were installed, I saw “Warning: This Jenkins instance requires a restart. Changing the state of plugins at this time is strongly discouraged. Restart Jenkins before proceeding.”. Which makes sense. Odd the upgrade process didn’t prompt me to restart. I did it myself at this point.

The five existing jobs ran the same way as they did before upgrade.  That odd phrasing was because what really happened was:

Jenkins 2 claims to be fully backwards compatible. As near as I can tell, this is true. I didn’t run into any issues related to migration. I even felt comfortable deleting the giant backup file at this point.

What I noticed very quickly

Granted Pipelines were available in Jenkins 1. Looking at the jobs we had, we have three distinct steps (the main build runs CI and Sonar and then a JavaDoc build runs.) It would be good to have the Sonar one as a top level citizen and equal to the JavaDoc one. I decided to try to re-write the whole thing in Groovy (rather than calling the existing jobs) to see how hard it would be. I also split the Sonar step out into its own stage. This would have been more difficult to do as a separate job because I’d have had to pass the Sonar revision number and hack at it to use the same workspace. (I know how to do both those things – after all the original JavaDoc job uses an absolute path to the Ant script to run in the original workspace – but still.)

As an aside, I had trouble finding the workspace.

Figuring out email notification was a pain. In particular, getting it to email on every failure and first success just like the default used to be. But the rest worked pretty easily and end to end it only took me a couple hours (and 37 test builds) – it’s a pretty simple set of jobs. And now the email list is one place for all the JForum stages so we won’t have the JavaDoc build failing and nobody knowing again. The script wound up being: