Updated 8/19/2017: Amazon has now updated AWS CodeBuild service to support Teams! In other words, in the 2 days since I posted this issue, it has now been fixed. Hooray! I now see my team projects in the list of repositories after linking my account. One minor nitpick though… They sort the list of repositories in the drop-down chronologically, not alphabetically. Since I have hundreds of repositories, that means in order to find a particular one I have to remember the order it was created. Hope they fix this (minor) issue too!

As a user of both Bitbucket and AWS, I was recently excited to hear Amazon had announced integration with both AWS CloudBuild and Atlassian Bitbucket. For those unfamiliar with these two products, AWS CloudBuild is part of Amazon’s suite of code automation CI/CD toolset. This service, along with the full suite, provides the ability to automate software build creation, testing, and deployment. Atlassian Bitbucket, on the other hand, is a large source code repository provider. The AWS announcement means that you can now build projects in AWS using Bitbucket repositories as the source.

Or that’s what it was supposed to mean… Apparently, no one told AWS that most professional software development companies use Bitbucket Teams to manage projects. The new AWS integration is accomplished using an OAuth authenticated sign-in from within the AWS CodeBuild project creation wizard. Unfortunately, after logging in it only allows two types of repositories to be selected: public repositories and those in your *personal* account. Most people using Bitbucket professional use teams and do not store the repositories in their personal account. The result is that no repositories are available for integration.

In other words… it’s broken. One solution would be to authenticate with the team login but Atlassian disabled the ability to login with the team account years ago. Now, Amazon only announced this feature recently, so it is possible they will get around to fixing it but in the short-term it is quite disappointing. While there are other ways to integrate AWS CodeDeploy and Bitbucket, I was looking for an all-in-one solution. In fact, when I recently tried Atlassian’s plugin to integrate one of my repositories into AWS CodeBuild, the web page just froze. Oh well, hopefully Amazon will fix this oversight soon!

By the way, you might ask, “Why I don’t just move my source code repository into AWS CodeCommit?” The answer is simple logistics. If I have hundreds of projects used by hundreds of developers, migrating them to a new repository is not easy/fun. The advantage of having this integration working is that it provides a nice, fluid transition toward migrating to AWS builds, without the commitment of actually transferring any repositories.

Jeanne and I are really excited to announce that our new book OCA / OCP Practice Tests: Exam 1Z0-808 and Exam 1Z0-809 is now shipping. In fact, we just received our copies today! The book is available in both print and digital formats from Amazon and other major book retailers. In addition, purchasing this book grants the holder access to Sybex’s interactive test bank!

This book serves as worthwhile companion to our previous two books, now available as set, The OCA / OCP Certification Kit. With this book you are really getting two books in one, as Jeanne and I packed over 1000+ questions into this text, covering both the OCA and OCP exams. To better prepare you for test day, we also threw in two simulated OCA/OCP exams. Whether your taking the OCA exam now and thinking about the OCP exam down the road, or taking the OCP exam and need a refresher on the cumulative material, this book has got you covered! 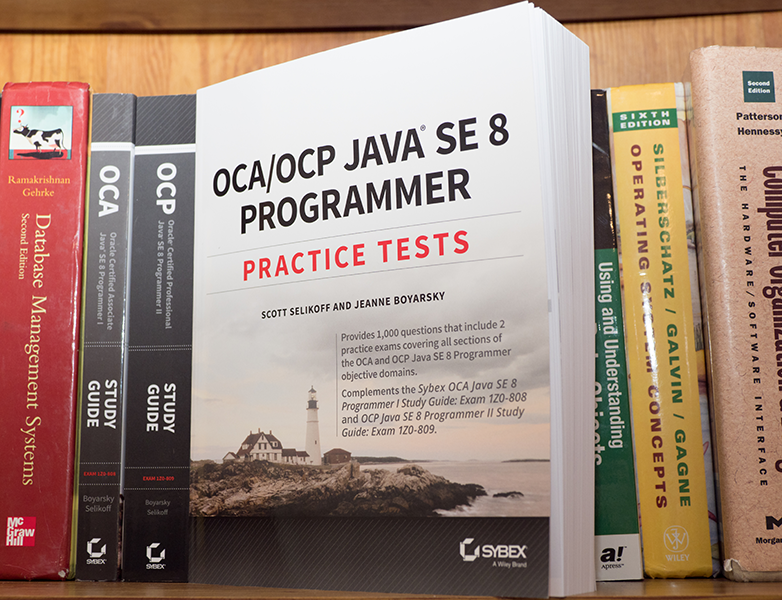 This book covers 100% of all exam objectives in these practice tests, which means you’ll be ready for:

Jeanne and I put a lot of time, energy, and planning into this new book and we really hope our reader enjoy it!

Our 8 Nights of Java series is nearly at an end! Tonight we look at Java 7, the first version of Java released entirely by Oracle. Java 7 included many goodies for developers, in the form of Project Coin. In a lot of ways, Project Coin was straight off of most developers Top 10 Wish List. Like Java 5, many of the futures were compile-time enhancements and helped to simplify numerous lines of code down to just one, allowing developers to focus on the important logic in their classes rather than syntax.

Java 7 Notable Features
Oracle released Java 7 (codename Dolphin) on July 7, 2011. After 5 years of Java 6 (including 131 updates) and the acquisition of Sun by Oracle, it was finally time to add some new features to Java. Key new functionality included:

I love Java 7. While Java 5 “fixed” Collections by adding generics/autoboxing/foreach loops, Java 7 greatly improved the language by adding things that I didn’t even realize I was missing. The greatest of those (for a database-driven developer such as myself) was the try-with-resources statement. We’ve spoken in the past about finally closing JDBC resources, and to be honest, even we forget to do them sometimes. Could you blame us? The syntax was horrible. Especially because close() throws a checked exception which often must be caught inside another catch block! The try-with-resources statement fixed this not only by designing a syntax that was simple and easy to use, but finally providing a “standard” for all developers to work off of. After Java 7 was released, if I came across another developer opening/closing a connection without a try-with-resources statement, I could instruct them to replace it with one that does, thereby ensuring any possible resource leak is closed.

Project Coin had many other, very useful features. Strings in switch statements had been requested by numerous developers, especially beginners learning Java, for the better part of a decade. The diamond operator, while seemingly simply, greatly reduces assignments involving embedded Collections… such as “new HashMap<String,List<Integer>>” to just “new HashMap<>”. It was a pain to write out the full generic expression on both sides of an assignment! I don’t tend to use binary literatals or underscores in numbers, but I’m thrilled they were added to Java 7 since it makes reading other developers code a lot easier.

So many awesome features for developers in Java, I haven’t even gotten to the improved Concurrency API and new NIO.2. Both are extremely powerful, fully developed libraries that you can use to developer complex applications in minutes. And both got even better in Java 8 with the inclusion of… oops! Guess we’ll have to wait till tomorrow night to finish that sentence!

When I was young, the local college built a science building and named it the “New Science Building.” It’s still called that.The problem is what you call the one after that. NIO.2 had the same problem. “New I/O” didn’t take so well and now the name is taken. Luckily NIO.2 is nice! I use it a lot in my coding because I do a lot of file system work. I find myself using Apache Commons for I/O operations very rarely now.

Then there is Project Coin. While some is just semantic sugar like the diamond operator, it still makes the code cleaner and less redundant. The try with resources is great for not having to deal with boilerplate code! I also appreciate multi-catch. Before it existed, I’d often revert to “throws Exception” rather than independently catch two or three exceptions and handle them the same way. This happened a lot with a framework we used that declared two checked exceptions. It also happened a lot with XML parsing and reflection. With multi-catch, I’m more inclined to do the right thing and handle them all in one line.