In  the traditional agile retrospective, everyone gets in a room and puts post it notes on a board.  The group then sorts the post its by topic.  Then there is discussion about the points brought up.  I find there are a few limitations with this approach:

I’ve done about a dozen retrospectives where people write on post-its in advance of the retrospective and leave them in a shoebox.  (We’ve extended this to having the shoebox available for the length of the project so team members can add thoughts as they occur.)  We then have myself and another team member group the post its by category.  Then we use the actual retrospective meeting for discussion/brainstorming.  For members located remote, we let them e-mail post-it notes.  This loses the anonymity, but people haven’t seemed to mind.
At he end of the season, the programmers of Stuypulse do a  lessons learned over e-mail.  We had more new programmers this year that stuck with the team than ever before.  I wanted to make sure we got their input and the brainstorming wasn’t “biased” by older team members.  I suggested we do a retrospective.  It was an experiment for me too as I’ve never done one completely remote (or without post-its or a shoebox.)  Remember that these are high school students and it is likely they’ve never done any type of agile retrospective before.  Here’s what went down.

I searched if there was an online retrospective website and didn’t find anything.  [If anyone reading this knows of one, please post a comment.]  Instead of post-its, I created a google docs spreadsheet with the following columns:

Ina corporate environment, I just sort/group the post its.  With the high school team, I also edited a little.  Just to avoid “I agree with so and so” because the sorted post its don’t have names on them.  This took me about an hour.  I did not edit the items for length even though some contributes were sentences (which is really long for a post it note.)  I also added a couple post its to round out groups and get at missing subtext.  I’ve added post-its while grouping in a corporate environment too when the contributed post-its dance around an issue.  This is actually the first time I’ve grouped post-its without having an “other” kitchen sink category!

Now that we are ready for phase 3, the spreadsheet has three tabs:

This hasn’t happened yet.  I’m sending the spreadsheet out today.  I expect it to be like the lessons learned e-mail threads of the past though.  Which is fine now that we’ve gotten the topics to talk about out there.

Two years ago, I wrote about cropping video fast for dummies on Windows.  I now need to do the basically same thing on the Mac.  This time is a little simpler as I only need one continuous segment cropped.  And I have more experience.  I’ve done it once before 🙂 on a different operating system.  However, I still don’t have any special software.

The original video is 2 minutes and 44 seconds.  I want to get a 5 second or so video of the robot shooting a basket.

It was requested I provide a Flash version of my 4 seconds of video.  There is software you can download that does this, but I didn’t want to download something (trial version) that I’d only use once.  Another option is to upload it to youtube.  I went with the youtube option.  Then back to ClipNabber to download as flv (flash.)

This process was better than the Windows way (without a real editor.)  iMovie is impressive.

The completed video does show what I wanted.  It was easier to get rid of the sound this time too which is good because I won’t control the viewer’s machines this time.

I wanted to edit a three minute video down to less than 15 seconds.  I’ve never done this before and don’t have any special software.  And I needed to do it in an hour.  What to do?  What to do? 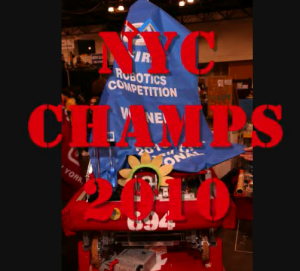 I was giving an Ignite style presentation on Stuy Pulse’s journey this season (FIRST Robotics team #694).  Since Ignite slides are 15 seconds in length, I originally decided to go with a static picture.  The night before my presentation, an alum of the team sent out a really good 3 minute video.  I thought it would make my presentation much better to include one 15 second “slide” of video.

The original video is 3 minutes and 36 seconds.  I decided it would be nice to show kicking a goal in autonomous (no humans involved), driving over the bump/ramp and hanging.

This process was good for some rough editing.  I met my goal of having a clip under 15 seconds showing these three things.  For “real” editing, you’d want a better product of course.

The completed video does show what I wanted.  I didn’t edit out the sound because I knew the speakers would be off during my presentation.  The words that went with that slide were:

Then the next slide is a screenshot of the congratulations message; the one at the beginning of this post.

And yes, I got permission from the video creator to do this and blog about it.