At CodeRanch, we frequently encounter the question, “should I take the OCA/OCP 8 certification exam or wait for the Java 9 cert to come out. My answer is to take the Java 8 cert. It could be a long wait for Java “9” certs.

Granted the Java 8 exam had a lot more changes than the Java 9 exam will have. Especially on the OCP. So it shouldn’t take AS LONG for Java 9. But I would be shocked if the OCP 9 was out the middle of next year.

That was before the announcement of a 6 month release cycle for Java with a long term release every three years. The roadmap lists Java 9 and Java 18.3 as being non-long term support releases with the first one coming out in September 2018 with Java 18.9.

I imagine Oracle would update the cert with 18.9. It makes sense to do it after the results of a re-branding. It makes sense to do it when things are more stable. I feel like Java 9 is still “figuring out” Jigsaw and there will be changes by then. I also thing they are going to tie the cert to the long term support releases. It’s a lot of work to update the cert and doing that every 6 months seems like something they won’t undertake.

But no worries. The Java 6 cert still exists so it isn’t like the Java 8 one is getting pulled out from under us!

Disclaimer: I do not work for Oracle nor is this post based on anything Oracle has said. It represents my opinion. 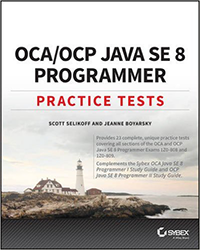 Scott and I are thrilled to announce that the Kindle version of our third book, OCA / OCP Practice Tests: Exam 1Z0-808 and Exam 1Z0-809, is now available for purchase on Amazon! The paperback edition, available for pre-order, is currently printing is shipping in April.

This book, has over 1000 practice questions. Each exam objective has a chapter designed to focus you in on key points and reinforce them. The two practice exams closely simulate the real exam even telling you how many answers are correct.

Both the paper and Kindle editions come with free access to Sybex’s online exam simulator. The publisher has redone the simulator since our previous editions were printed. I got to beta test the software and was overall happy with the new interface.

I gave a presentation to high schoolers about the OCA Java Programmer I certification. I was asked over email how well the AP (Advanced Placement) Computer Science class provides the foundational info for the OCA cert:

My main question is wondering how close within reach the java certification would be and how useful it would be to students.  From what you said, the value of having the cert is very good.  But, I’m still wondering about how much additional work will be required to achieve a good result.  I understand your point about needing study materials etc,-  that’s all a given and something that today’s students are very used to doing (PSAT, SAT, ACT, AP, CLEP, etc.).  But, do you expect that generally an AP Computer Science course would provide the foundational info needed to pass the test, and then the student just needs practice to be proficient and quick?

All of these is easily learned through a study guide so I think a student preparing for the AP exam is in good shape to pick of an OCA certification study guide.

Plus it is likely the student’s class is using a book which was not intended for the narrower scope of the AP exam. Which means the student would have come across some of the above anyway.