I got this question in a comment to a blog post and decided to answer in blog form.

Per the Oracle FAQ, you cannot use the 1Z0-817 upgrade exam to upgrade from an exam Java 5 or earlier straight to the OCP 11. If your goal is OCP 11, there are a few options on how to get there. Each comes with pros and cons.

At CodeRanch, we frequently encounter the question, “should I take the OCA/OCP 8 certification exam or wait for the Java 9 cert to come out. My answer is to take the Java 8 cert. It could be a long wait for Java “9” certs.

Granted the Java 8 exam had a lot more changes than the Java 9 exam will have. Especially on the OCP. So it shouldn’t take AS LONG for Java 9. But I would be shocked if the OCP 9 was out the middle of next year.

That was before the announcement of a 6 month release cycle for Java with a long term release every three years. The roadmap lists Java 9 and Java 18.3 as being non-long term support releases with the first one coming out in September 2018 with Java 18.9.

I imagine Oracle would update the cert with 18.9. It makes sense to do it after the results of a re-branding. It makes sense to do it when things are more stable. I feel like Java 9 is still “figuring out” Jigsaw and there will be changes by then. I also thing they are going to tie the cert to the long term support releases. It’s a lot of work to update the cert and doing that every 6 months seems like something they won’t undertake.

But no worries. The Java 6 cert still exists so it isn’t like the Java 8 one is getting pulled out from under us!

Disclaimer: I do not work for Oracle nor is this post based on anything Oracle has said. It represents my opinion.

Today was Amazon Prime Day. among other things, they have lightning sales. Our OCA 8 book was one of them.

Up to 100 people could buy a discounted copy of the book. Six people did when I checked shortly before the sale ended. I’m impressed that anyone knew about it. That or 6 people normally buy the book in the 6 hour timespan of the sale and this was random luck.

I read online that some Amazon sales are illusions. So I checked on Camel Camel Camel. In the last three months, the price was never lower than $29 and averaged over $30. So twenty five and change is in fact a sale. Happy Prime Day. 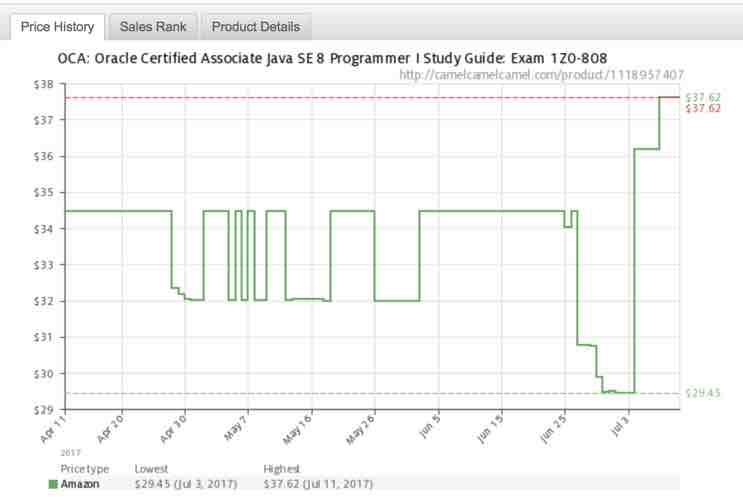