On September 2, 2011, Google announced it was deprecating the Google Maps API and actively encouraging users to migrate to JavaScript Maps API v3. While abandoning support for the Flash API comes as a bit of a shock, it is not completely unexpected, as Google has not released an update for the API in the last year and support for issues related to the Adobe Air version had deteriorated. As a silver lining, Google’s depreciation policy indicates the product will continue to function for three years until September of 2014. 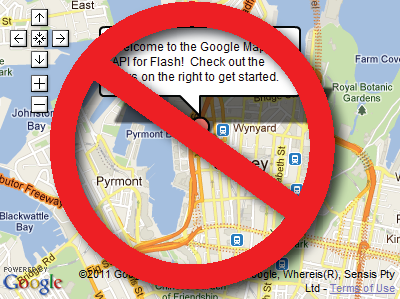 As JavaScript has radically evolved over the last few years, it is understandable that Google wants to settle on a single, browser-independent platform for its Google Maps API. In fact, the more I ponder the loss of Google Maps on the Flash/Air platforms, the more I am disappointed with Adobe for the current Flash situation. Following the release of Flash Builder 4, Adobe decided to take Flex in a different direction, one I objected to in my review of Flash Builder 4, focusing more on wooing designers than developers with its new skinning interface. In fact, prior to Flash Builder 4, I encouraged Java developers to learn Flex given the similarities in syntax and the richer user interface than Swing/JavaFX. These days, I do not encourage anyone to learn Flex, as the current API is erratic and future of Flash/Air is unknown.

The Future(?) of Adobe Flash and Adobe Air

The loss of Google Maps for Flash/Air feels like another nail in the coffin for Adobe Flash. Flex developers may recall that Adobe launched Air more than three years ago as a stand-alone Flash application platform. Adobe Air provides a run-time environment, similar to the Java JRE, that offers developers a richer feature set and more customization than a standard web-based Flash application allows. Unfortunately, with the growing mobile market, Adobe has virtually abandoned all efforts to market the Adobe Air platform. In fact, I can count on one finger the number of individuals, myself included, who I know have the Adobe Air runtime installed.

The last few years has seen the rise of mobile platforms in a big way, so much so that proprietary web platforms like Flash, Silverlight, and others have fallen by the wayside. I think Adobe’s biggest mistake regarding Flash in the last few years was in not actively pushing Adobe Air as a general purpose platform. Despite adding a number of Flash-specific features in the latest CS5.5 release, Adobe has not done a lot to encourage developers to stick with the platform. The loss of Google Maps for Flash may be just one in a series of events that leads to the end of the Flash platform as we know it.