First of all, happy birthday. This is Eclipse’s tenth annual release train.

When I went to eclipse.org, I saw a nice picture of Mars. I have a choice of downloads including Java EE, Java and Spring Tool Suite. The matrix comparing the packages is still clear. I chose the Java EE version. The download page had a warning that “Eclipse requires Mac OS X 10.5 (Leopard) or greater.” No problem. I’m on the latest version. I’m also on the latest version of Java 8. 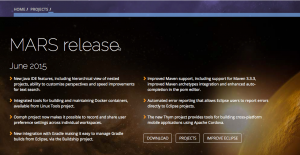 The first thing to notice is that Eclipse provides a tar file. Ok so that’s not new. What is new is that the tar file cannot be opened by the tar command because it contains absolute path names. And that Eclipse is now a native Mac app. This took me by surprise because I installed before looking at the docs.

Eclipse Mars uses more memory by default. Make sure you have enough before launching. I don’t expect to have problems with this.

When launching my workspace, I got the warning:

Which is fine. I’m not going backward. And all the important code is in Subversion or Git anyway.

Like last year, I decided to install the plugins I need for Eclipse Marketplace so I can shed the plugins I tried out and don’t actually want. Cleaning plugin house once a year is nice.

The significant plugins I use are listed in this table. A number of plugins were beta for Luna or I had to use the Kepler version. I don’t remember that problem in previous years.

Last year, I tried out the Code Recommenders plugin. I didn’t install it this year as I hardly used it. I added Contrast and Bytecode Analyzer as plugins I installed in the past 12 months that I like. I also added ADT and tried out Optimizer for Eclipse by Zero Turn Around.