FRC Team 694, StuyPulse is currently competing at the China Robotics Challenge which is an off season event. The event uses the same game/challenge as the “main” season which ran from January 2016-April 2016. This year’s event was the Stronghold game. In the autonomous part of the game, you got points for going over obstacles (defenses) and/or shooting a ball into a target.  The team worked on CV (computer vision) very hard this year. This was going to be the year we used CV in competition.. We used it one year when a lot of the code was supplied to teams. And we got CV recognition working last year, but not soon enough to integrate with the robot. We did have a really cool demo where it automatically recognized a target but never quite got it fully working with the robot.

Which brings us to 2016. Don’t get me wrong, I’m thrilled that it worked. But that’s only a piece of why I’m so proud of what happened with CV this year

There were dedicated team members who focused on CV for most of the build season. This wasn’t one student on a Skunkswork project. Making a subteam shows this is a priority. Something the team values and wants to see succeed.

There were students in different grades on the subteam. This will ensure that the knowledge and experiences gained won’t all graduate at the same time. Which allows this to become a skill that grows every year rather than having to start over.

The last two years I’ve seen a marked increase in the deep understanding of how CV works. It isn’t just poking at it. This is hard stuff. Same for communication channels between the camera and the robot. Although I did enjoy the discussion about bit endian vs little endian on transferring data. I knew it was that because we had that problem in the past. So seeing it back, I recognized it faster. Convincing the student I was working with on the problem took a little longer ;).

Some years, I see mixed messages about CV. Whether it is the drivers not trusting it or other parts of the robot being higher priority, the messaging can become demoralizing to the people working on the code. This year, I felt like the whole team wanted to see this happen. There were designated windows to work on CV integration with the robot even really close to the robot’s due date. It wasn’t shafted. It wasn’t put on the back burner.

There were a number of integration problems. The students quickly adjusted to each one trying different strategies.  And they learned what works/doesn’t work for next year too.

Whether it was between matches at competition or after we got eliminated at a competition, the students were working at various aspects of the robot. Even after it became apparent we weren’t going to run the CV during competition because the risk at Championships was too high, the students STILL didn’t give up. They made the most of practice field time to test. They kept testing and integrating and testing and… They *never* gave up and got it working.

At home, I have a Peanuts picture near my desk. It has Lucy holding the football and Charlie Brown looking at it with a caption “Never ever EVER give up.” This is really important. You never know when pushing just a little bit further is going to be the difference. And I’m so proud of them for that. Pushing past the point where most people would give up in a really important skill and just as important as tech skills.

On “stop build” day, the team had come further than ever before with CV. The electronics mentor and I chipped in and bought cookies to give out at the “tagging ceremony.” (This is when the code gets tagged in github as the last code tested on the robot before ship date.) I spoke for a minute or so on how big a deal with was and issued a challenge. I would bring in “something better than cookies” if they scored a certain number of goals with CV in competition. A 9th grader said “there’s nothing better than cookies.”

This is the first year I believed it could happen. (Sorry Josh – there were too many forces against you.) While that didn’t happen it wasn’t because of not being able to do it. It was that the risk of getting eliminated at championships was too high by the time CV was reliable. It was the right call.

So at the end of year dinner, I extended the offer to include the China Robotics Championships. Where they scored in autonomous in two out of two practice matches. While the number of goals for my offer is higher than two, the repeatability of getting 100% of them in practice matches is enough for me to declare success for the contest.

Which bring us to – what is better than cookies. It’s not pizza. We eat too much pizza during the build season for that to be a reward for anything. Instead the answer is chocolate: 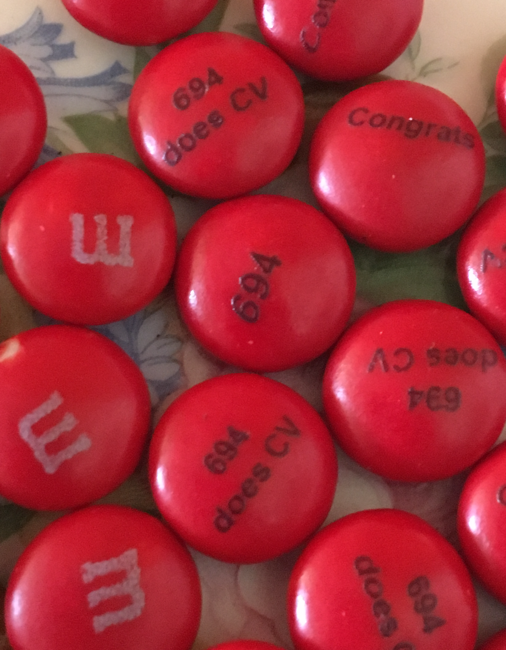 Congratulations 694. I am so proud of you for this accomplishment. Both both the tech skills to do it and for the soft skills and tenacity. Great job!!!