Thinking about using our OCA 8 book to study for the Java Foundations Junior Associate exam? It covers most of the topics. See what other topics you need to learn and where to read about that. One of those topics is formatting a String using %s, %n and %d. Conveniently for you , I had written a draft of this material for our OCP book before finding out that topic is not on the OCP 8 exam. I asked our publisher if I could post the material online and they said yes. I’ve edited it down to cover the subset that is on the Java Foundations Junior Associate exam. While the style matches our book, keep in mind it has not gone through the normal editing process by our publisher.

Note that the exam only expects you to know %d (digit/integer), %s (string) and %n (new line). This post cover a bit about %f (decimal) for two reasons:

Formatting a String is useful because they let us specify a lot of complex logic clearly and succinctly . Imagine you had to write code to print out exactly 3 decimal places and align the decimal places. That would be a lot of coding and logic. Or it could be done using formatting:

Don’t worry if this seems like magic. In a nutshell, this uses a width of 7 with 3 decimal places followed by a new line. It outputs:

You don’t have to be able to write code like this. It is just to show the power of formatting. Also, there are a lot more types and options in existence than you need to know for the exam. See the Formatter class in the Javadoc for the ones not on the exam. The following figure shows what is going on from a high level. Java is substituting the parameter into a part of the format string. 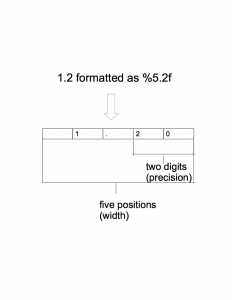 Ok. From this point, on you do need to know the material for the exam.

The PrintStream class defines the methods format and printf. They do the exact same thing. Java wanted to name the method format. However, C++ has had this method called printf for decades. Java supports both names to make things easy for both C++ developers and new developers.

System.out and System.err are both PrintStream instances. Remember that System.out.println() can show up in questions on just about anything as can System.out.printf(). This means you won’t know specifically if you are being tested on printf or something else.

The signatures of these two methods are:

Remember that the three dots mean varargs. You can pass as many arguments as you want here. Also, remember that format and printf are exactly the same so we will start to use them interchangeably.

The first parameter is a String with embedded format parameters. The remaining parameters are an ordered list of the parameters to be inserted:

There are a number of parts to a format string. You only need to know a simplified version which looks like:

%d and %s are format conversion specifiers. These format specifiers indicate the type of the parameter. You are only required to know three of the format specifiers for the exam as listed in following table. You do have to memorize these. They are copied from C++ so some of the types might seem odd to you. We’ve tried to give a description that helps you remember it rather than the shortest one possible. If you are a C++ developer, you might know that %d actually stands for decimal rather than digit. This is harder to remember for a new developer because the whole point of %d is that there is not a decimal point.

Remember that %d is digit (integer) and not double.

The remaining part of a format string is the argument index. This is the index number followed by a $.

Argument indexes start counting from 1 instead of 0.

These examples should be straightforward:

For example, the following statements create a Formatter object and format a string of primitive types. What do you think this outputs?

In this example, the Formatter writes its output to a StringBuilder object. The int x is formatted and the resulting StringBuilder looks like this:

printf() and format() use a format string. You need to know the simplified format of: %[arg_index$]conversion_char. The arg_index is optional. However, it must be specified in the correct order if present. The components you need to know are:

What is the result of the following code?

Which of the following are true about the format string passed to printf? (Choose all that apply)

The answers are posted here.