Overall, the Accent 4 case design is quite nice. Unlike older iPhone 3 cases that most iPhone 4 owners have been using for the last 2 months, the Accent 4 fits the iPhone 4 perfectly. The mute button and power adapter are fully exposed. The speakers on the bottom are partially exposed with thin mesh netting over them. The volume buttons are cover by a thin sheet of leather with indentations for each button. Finally, the death grip area is completely covered so no need to purchase an iPhone 4 band aid.

During the two month wait for the case, I called Marware support a few times, hoping to get a solid delivery date. It was scheduled to be sent out mid July but the Marware customer service representative informed me that there was a problem with the hole for the camera and flash being too small. They said it would be delayed another few weeks while they redesign it. I’m sorry to say, though, that they did not resolve the issue with the camera as the test below demonstrates:

I tried a number of different variations in light rooms, dark rooms, and pitch black rooms, but the results were all the same. As shown in the picture, some of the reflection was off the top of the hole so I tried readjusting the position of the iPhone inside the case but even without the direct bounce, there is always an awful glare/haze covering the picture. All of the pictures I took with the iPhone 4 inside the Accent case came out with a glare similar to the one seen above. 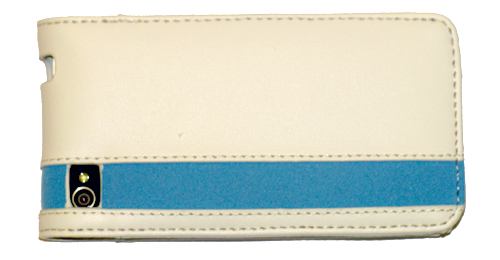 Examining the back, the hole is large enough for the camera and flash to be seen without obstruction but not large enough for the flash to function properly. The flash functions by spreading light outward, and the width of the leather is too large so as to catch the light from the flash, and reflect it back into the lens.

Having ordered my case through Marware directly, I contacted Marware support about this defect. Despite the numerous revisions, Marware checked with the shipping manager and assured me that I did indeed have the finished product. Unfortunately, as the pictures above show, this product is still quite defective. I have to assume someone just said “close enough” and shipped the product as is. The support representative indicated Marware was not planning another revision at this time, although offered to refund my money. After waiting two months for a case, I’m reluctant to wait another two more.

As per our phone conversation today, the case you received is the most recent one. There are no plans for re adjusting the camera hole again at this point. The only suggestion provided to me is that when you use the flash, to push the iPhone up out of the case a little. If you are not comfortable doing that we can either exchange for another case or give you a refund.

I look forward to hearing back from you.

Despite acknowledging the issue, Marware does not seem to be interested in fixing it. At this time, I cannot recommend purchasing this case as it is clearly defective.