There’s been a growing number of users claiming have issues installing Apple’s new Snow Leopard operating system that was released yesterday, and as I was one of those users, I thought I’d share my experience. I purchased the Family pack of Snow Leopard to install on 3 Mac’s in my home, all Intel-based, relatively new computers. Snow Leopard installed fine on two of the computers, but the third computer, an early 2009 Unibody MacBook, took all day. This is the story of that MacBook installation.

First, I installed Snow Leopard over the existing 10.5 system and everything seemed to go fine. The MacBook finished the installation and afterward restarted. At which point the following screen “loading” appeared on reboot and stayed for over an hour: 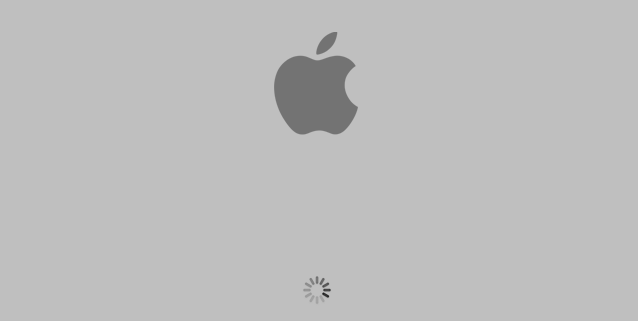 The Apple Store was booked up for appointments for 4 days. The phone support was actually decent and they told me try a number of things such as resetting the PRAM (hold down command-option-p-r on bootup), pulling out the battery, etc. They also instructed me to boot from the install DVD and run Disk Utility to check for errors. Unfortunately, no errors on the hard drive came up. Even attempting to start in safe mode (hold shift on bootup) left me with the screen above. At this point the only logical choice that the AppleCare representative and I could think of was to boot off the install DVD and reinstall. So they wished me luck and we said our goodbyes.

Since booting off the install DVD was possible, I ran the install again. Fast forward another hour, and the computer asked to be restarted at the end of installation. Holding my breadth, I pressed the restart the key. Patiently I waited as the previous “loading” appeared, but with some luck, it disappeared and the screen turned blue. Snow Leopard was finally starting! A prompt came up showing my username and asking for my password – it had saved my account settings! (my username, anyway) Then, as I moved my mouse toward the blinking cursor I noticed something odd. My mouse wouldn’t move. In fact, my keyboard was not responding either. Both the built-in MacBook keyboard and mouse were completely non-responsive.

Despite being tempted to throw the computer out a window, I went through the usual recovery ideas: plug in a USB mouse/keyboard, restart in safe mode, reset the PRAM, etc. None of them worked. The external USB devices were as inactive as the built-in ones. Safe mode had the same problem as regular mode, with no response from the built-in devices. Resetting the PRAM, even pulling the battery… no change.

At that point, I called AppleCare again. They were pleased that the ‘previous solution’ had ‘resolved’ the issue and requested I close the AppleCare incident and open a new one. Not really interested in their paperwork and increasing their ‘success’ statistics, I obliged. Since I was able to boot from the install DVD with an active keyboard and mouse, they determined it was not a hardware problem and it must be software.

The only solution they offered me, though, was to format the hard drive completely and reinstall a third time. I suggested doing one more installation on top of the existing system in order to preserve all of my settings, to which the representative responded, and I’ll never forget this, “Reformatting the drive is your best bet. Reinstalling a third time on the existing system is not likely to fix the issue, although I didn’t expect reinstalling a second time to do too much”.

Against the opinion of the AppleCare representative, I decided to do one more install off the DVD without formatting the hard drive. Before I’m ready to wipe a disc, I like to know I’ve accomplished all possible courses of action. And the result? All issues resolved. For whatever reason, Snow Leopard required 3 installations to work on this MacBook.

While all this was going on, I detailed my experience as it happened on Apple’s Discussion Forum, hoping someone might have a good suggestion. As I saw in the responses, others experienced the infinite boot screen as well as the keyboard/mouse failures. Fast forward to 10pm later that night, when Apple representatives called me personally. Not so much to see how I was doing, but saying they had seen my posts on the forums and were eager to access my log and system files. While they had contacted a number of people with these types of issues, I was one of the few (perhaps only) one they could find who hadn’t yet formatted their harddrive. In other words, the logs were still fresh.

I offered up my install logs, somewhat truncated to the last install, in the hopes of isolating and resolving these issues for the community. But before I got off the phone with the representative, I did get one last laugh. I indicated that, had the third install failed, I planned to wipe the hard drive and reinstall. The reason being, “Well, if three install attempts failed, it’s never going to work”. He responded “I see no reason you could not keep reinstalling indefinitely!”. Apparently, Apple representatives have a lot more time on their hands than me.

UPDATE: It appears I am far from alone in having issues: Information Week: Snow Leopard Causes ‘Spinning Wheel Of Death’