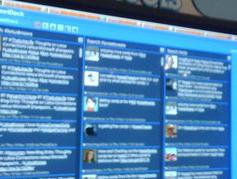 IBM gave out candy if you tweeted (or didn't) #sweettweet. My tweet on top middle.

Today, I attended day two of Web 2.0 Expo. See day. While I didn’t attend the main conference on day 1, there are a couple comments in here about it.  Many of the presentation files are available.

They had a live tweet stream of all items tagged #w2e.  Apparently on Tuesday people posted some less than appropriate things.  Edited to add link. Today the tweet stream was curated (are we in a museum?) and only appropriate ones showed on screen.  Or as the speakers said, the stream was censored.

Birds of a Feather

I liked the Wednesday Birds of a Feather much more than the Tuesday ones.  I attended two sessions on both days.  Each day, one had a decent number of people and the other was almost empty.  However, the Wednesday ones had more of what I call “prepared discussion” while the Tuesday ones were more presentation driven.  Since the spirit of Birds of a Feather is supposed to be about discussion, I was surprised by the amount of presentation involved.

Like Birds of a Feather, Web 2.0 Open also focuses on participation over presentation.  I only attended one of their sessions today, but they did a great job.  There were a lot of people in the room, they were engaged and there were references to discussions earlier in the day.

Check back tomorrow for comments on the final day of Web 2.0 Expo.