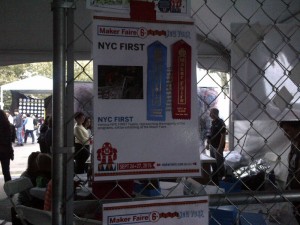 This is the sixth year that I’ve co-organized the NYC FIRST robotics area at World Maker Faire. Every year, it is so much fun. This year, was our first year in the robotics tent. The last two years, we had a standalone small tent. Being in the robotics tent was great. More cross pollination from related exhibits. Plus we were near one of the entrances so got traffic very early in the day.

Maker Faire was very nice in letting us “expand” outside the tent so kids could play with and drive the large five feet tall FRC robots. It was like having a backyard.

We won two ribbons this year. This was the first year we won two in the same year. The blue one is “Editor’s Choice.” The red is “Best in Class.” Not sure what our class was, but still cool.

We got to deal with two our contingency plans this year. Luckily, both were minor. Our tent experienced a brief power outage (maybe 10-15 minutes.) It also drizzled for less than 5 minutes. Everything went smoothly though and I had a great time at the event.